My First Experience with Chalk Paint: A Before and After

After buying both some Annie Sloan Chalk Paint and Miss Mustard Seed's Milk Paint a few weeks ago, I finally jumped in and painted something!! Yippee. Can't tell you how good it felt be doing something hands on:)

I decided to start with this little black cabinet in our kitchen that I keep my cookbooks, recipe printouts and various other...crap...in. (Its originally from Target, but I scored it for free when my old office moved and they didn't need it anymore.) 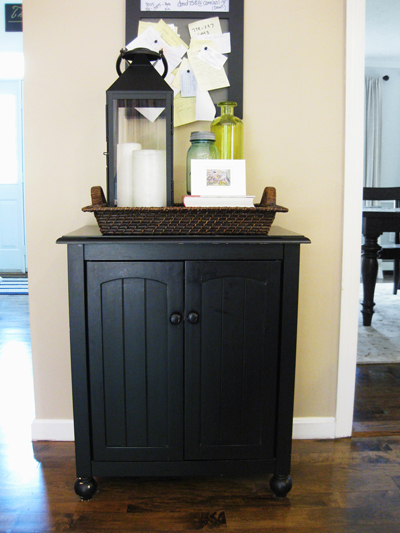 I purchased a sample jar of ASCP in Duck Egg for $14.95 and hoped to get away with just that to cover this baby. I didn't do the inside (or the back), but by adding a little water to the second coat to stretch it out a little (a trick from the awesome guys at Maison Decor in South Boston), I was able to get her done! Here's the after: 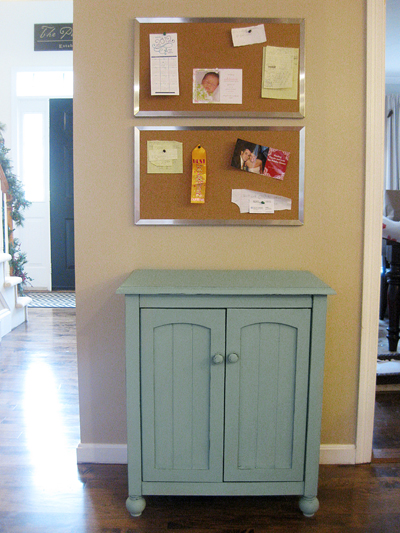 Ahem. No, I didn't get a chance to style the top of the cabinet, so this not as pretty of an after as it should be, sorry!! But you may notice that I did get something else done...after like a year of not writing a single thing on the wipe board above the cabinet, I took it down and put up the two cork boards from Pottery Barn that I've had sitting new in their boxes for like three years. High five! 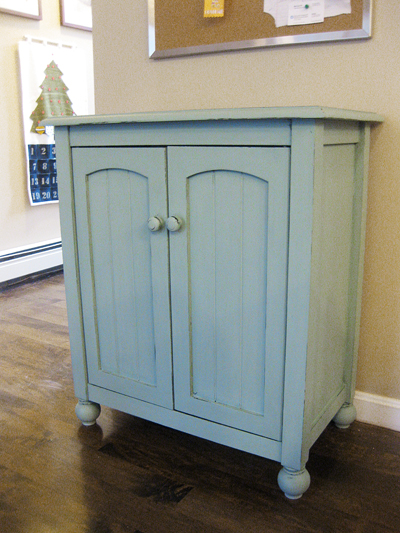 I love this Duck Egg color! Its that lovely ambiguous area between blue and green and grey, one of my favorite colors that I never quite know what to call. I feel like a lot of the details of this piece like the bead board and turned legs were getting lost before in a sea of black, but now the new color brings them out a bit. 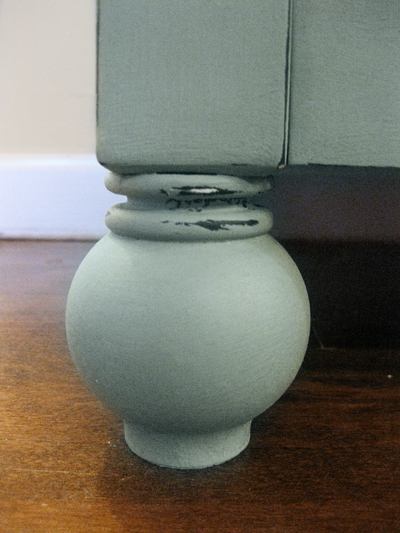 And can I just say that I really really liked working with the chalk paint! I did no prep, other than dust the cabinet, pull it out from the wall a bit and slide a piece of paper under each leg so I wouldn't get paint on the floor. Then while Maura was napping, I went to town. I had no idea what I was doing, but it didn't seem to matter:) The paint went on great, the brush strokes sort of seem to dissolve, and if you do see them, it somehow adds to the look, not detracts. 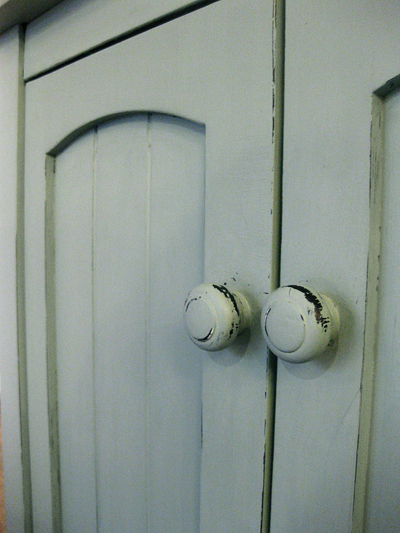 After the two coats, I took some sand paper and distressed the edges a bit. Most of the time I got it right and just the black showed through, other times I think I rubbed too hard and some white start peaking through. It doesn't bother me though. In this I am not a perfectionist! 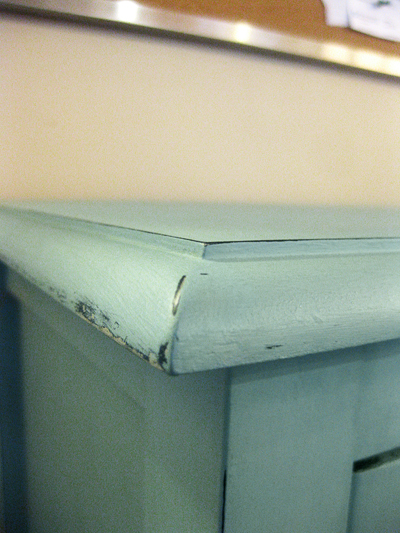 To finish the piece, I actually used Miss Mustard Seed's furniture wax, not Annie Sloan's. I bought Marion's to use on a piece I'm going to try next with the milk paint and the guys at Maison Decor told me I would definitely be ok using it to cover the chalk paint (which was really nice, they had my best interests at heart and didn't get me to spend money on something I didn't need). If I didn't know what I was doing painting this thing, I really really did not know what I was doing when it came to the waxing bit (last I checked Marion didn't have the tutorial up yet on her site on how to use the wax), but it was super easy and fast! It was kind of like wiping Crisco all over your furniture and then wiping it off. I also just used a cotton rag I made from an old t-shirt, didn't spend the money (yet) on the special waxing brush. 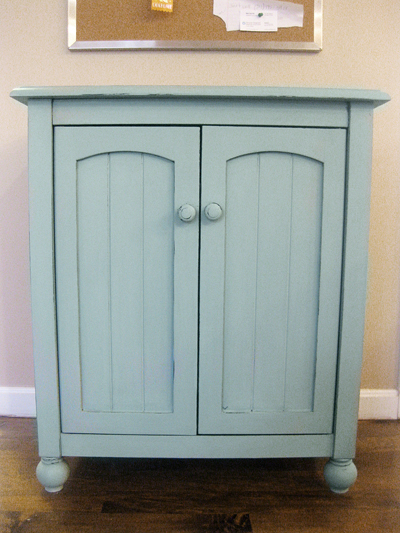 I kinda want to go around my house and paint everything now! I'm definitely a fan. At first I was pretty intimidated, but after having just jumped right in, I feel like I'm going to be using this stuff a lot. Well, next up I'm going to try out the milk paint, looking forward to seeing how chippy my piece will be on its own with just the paint doing the job. Anybody out there used the milk paint yet? Scared to try the chalk paint? Just go for it!!
Labels: Before and Afters Chalk Paint Furniture Paint 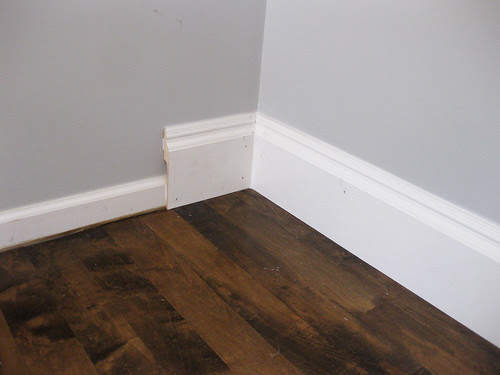 Sarah
Hi and welcome! I'm Sarah. Thank you so much for stopping by:) I'm a mom of two who loves to paint! I am super inspired by family, nature, and travel. I love antiques and puttering around the house working on DIY projects. At Pewter and Sage, we are passionate about helping you create a home that celebrates you and what you love.